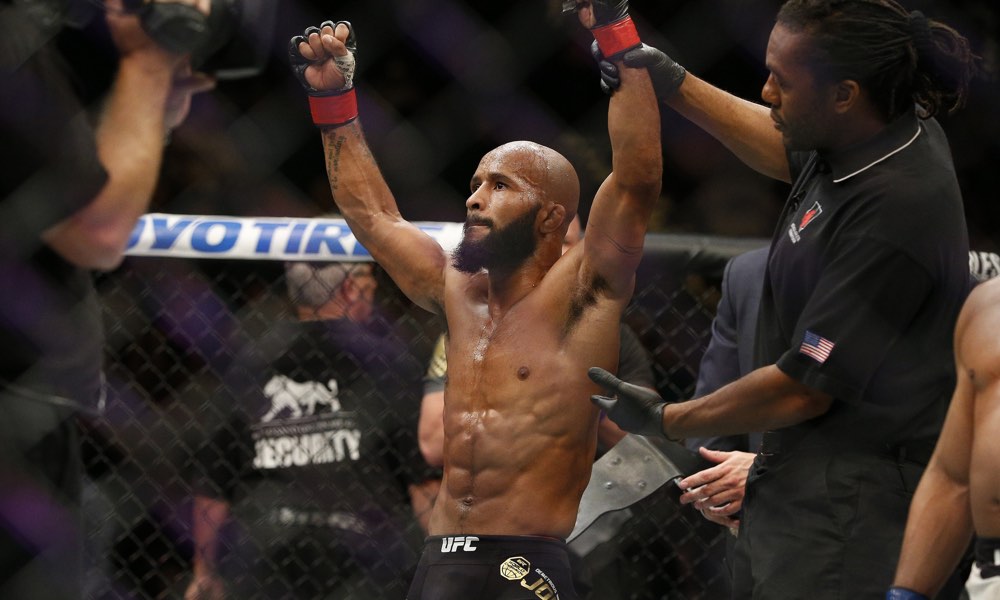 Johnson who’s the UFC’s first and only flyweight champion is one win away from breaking the UFC record for most title defenses.

Somehow for many, that won’t be enough and while it’s a very opinionated and debatable topic, the fact remains that Demetrious Johnson doesn’t get nearly enough credit for what he has achieved.

On October 7th at UFC 216, one of the pound for pound greatest fighters of all time will step into the octagon and attempt to break the UFC’s record for most title defenses.

Johnson is currently tied with Anderson Silva at 10 title defenses. He has finished 6 of his 10 wins with notable wins over Joseph Benavidez, John Dodson (twice) and Olympic Gold Medalist Henry Cejudo.

He will step into the octagon and take on the Jackson-Wink prospect, Ray Borg. Borg is 5-2 in the octagon, most recently beating Jussier Formiga back in March.

In his UFC appearances, Borg has displayed a strong grappling and submission game showing his ability to mix things up well.

Johnson, who holds first round finishes over Joseph Benavidez and Henry Cejudo has shown zero holes in his game. After losing two fights at bantamweight early in his career, the introduction of the flyweight division proved to be a perfect fit.

He submitted jiu-jitsu black belt Wilson Reis, outmaneuvered John Dodson and dispatched of both Benavidez and Cejudo in the first round. Quite frankly there is nothing Demetrious Johnson hasn’t done but why does he still not get the respect he deserves?

Perhaps it’s due to his size. The flyweight division as a whole has struggled to draw big numbers when it comes to viewership and buys but there’s nothing more Johnson could be doing in the cage. His fights are fast paced and action packed, more often than not, ending in a finish.

He may not be the brashest personality outside of the octagon but we’ve seen the likes of Anderson Silva and Georges St. Pierre draw big numbers with their soft spoken demeanor. In a trash talk, media driven era, it’s difficult for the fans to get behind you unless you’re giving the people a piece of your mind.

What St.Pierre and Silva had to their advantage was a UFC that hadn’t yet hit the international stage. A dominant Canadian champion helped them break into a passionate sports market whereas Brazil, a nation with rich combat history was able celebrate the brilliance of Anderson Silva.

For the American Johnson, there isn’t necessarily anything uniquely different that he brings to the table outside the octagon but he’d rather stick to his ways.

That was evident when bantamweight TJ Dillashaw called him out after Cody Garbrandt was forced to pull out of their championship fight. Johnson declined Dillashaw’s offer and insisted that he wanted to attempt to break the record by fighting Ray Borg.

He received a ton of criticism from the fans and UFC president Dana White who was all for the Dillashaw match-up. He felt that a super fight with Dillashaw would be Johnson’s biggest money fight to date. For Johnson, fighting a bantamweight who’s never cut down to Flyweight didn’t make sense and preferred that TJ at least fought once at flyweight in order to earn a title shot.

Fast forward a couple of months and Garbrandt vs. Dillashaw has been rebooked as well as Johnson vs. Borg which was originally scheduled to take place last week. DJ stuck to his ways and got what he wanted, even if the fans and Dana White don’t approve.

Now the pressure is on for Johnson to go out and put on a dominant and record breaking performance versus Borg. Should he do that, his name will be written in the history books and whether people choose to appreciate him or not, they will one day look back and respect his incredible resume.

Win or lose on October 7th, he will undoubtedly go down as a hall of famer and maybe when it’s all said and done, people will regret not appreciating a talent like Johnson. While we’re all wrapped up in the theatrics and social media posts, the record books will have Johnson’s name sitting there with only a select few.

Two of those select few are Jon Jones and Anderson Silva who both had their reputations put into question among many pundits due to their failed drug tests. Silva tested positive for drostanolone metabolites after his UFC 183 fight versus Nick Diaz. He served a one year suspension before returning to action.

Jon Jones most recently tested positive for the anabolic steroid Turinabol. This was his third failed drug test; the other two were for a recreational drug (cocaine) and one in which he received an exemption for.

Last year, he tested positive for clomiphene and letrozole and after further investigation, USADA concluded that Jones did not know that the tablet contained those prohibited substances. As a result, he served a one year suspension.

With a third failed drug test failure coming to light, Jones could be facing a 4 year suspension. No matter what the outcome is, these drug test mishaps will most certainly have an impact on the legacies of both Jones and Silva.

‘Mighty Mouse’ has managed to stay out of any major headline, which has proven to be both a good and bad thing. A record breaking title defense will most certainly earn him a new found respect as he continues to build an impeccable resume.