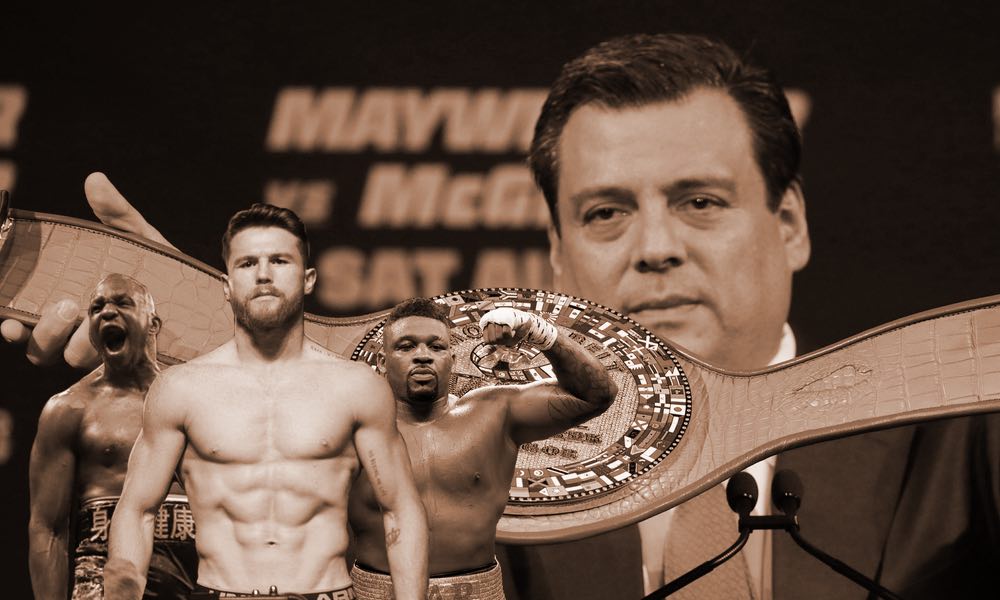 The WBC is considered the most prestigious boxing governing body in the world and they have been at the forefront of the campaign to keep boxing a clean sport. WBC prioritizes safety, welfare and wellbeing of the fighters before, during and after their boxing career in the ring as it’s main goal.

The WBC has worked diligently with VADA to create an integrated program to protect the fighters of the world from the dangers of drugs, PED’s, human growth hormone and several other substances and practices, which are hurtful directly and indirectly to the person using them and to their opponents.

Speaking to The Sports Journal exclusively, WBC President Mauricio Suleiman said “safety has always been WBC’s top priority and anti-doping has been a priority for us as well, it was the WBC who instituted mandatory anti-doping tests after every championship fight since 1975”

“The WBC under the leadership of my late father, José Sulaimán, spent years of research with highly qualified experts on this matter. It was his objective to one day create an out of competition protocol to test randomly and also to establish an awareness program to teach members of the boxing community the dangers of substance abuse and PEDs”

WBC has been ahead of most boxing commissions around the world to clean the sport of boxing, the WBC Clean Boxing Program is designed to educate through awareness programs to try to eradicate the use of any substance, there are also testing procedures, which are both voluntary and mandatory and Mauricio says the WBC was inspired by the late great Muhammad Ali and Nelson Mandela. 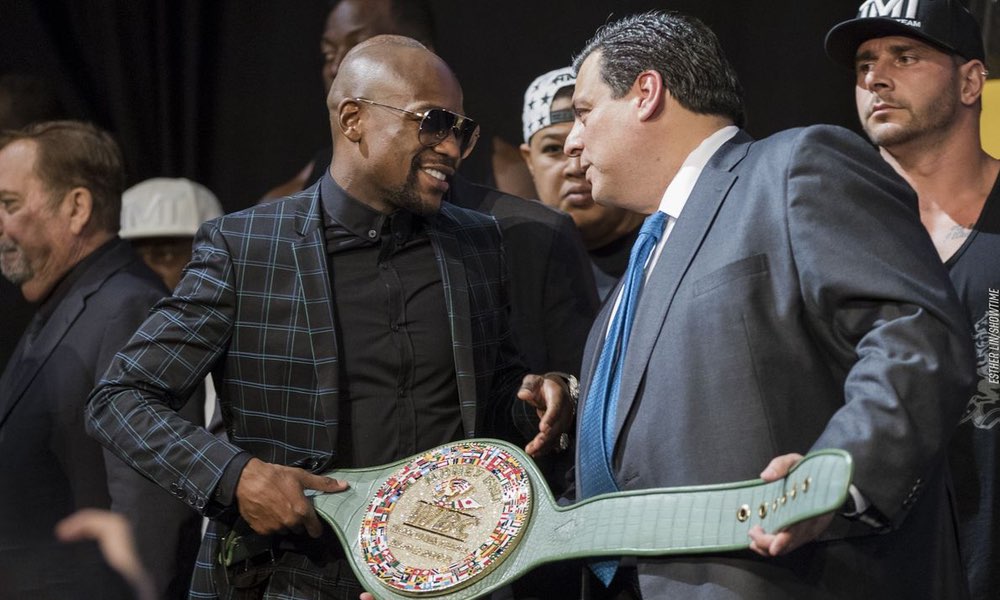 “The WBC was inspired by Muhammad Ali and Nelson Mandela to take this the fight against discrimination, abuse of power and to always fight for what is right and make sure justice prevails over any circumstances”

“There are several problems in boxing which are of great danger to the safety and the integrity of the fighters, including dehydration, weight management, and doping etc”

The WBC has made great progress by joining hands with many other commissions to participate and accelerate the program to as many boxers as possible.

“The WBC works with several federations and boxing commissions and we have offered the CBP to anyone who wishes to participate, as it is our intention to share our knowledge for the betterment of boxing.”

“And this is absolutely a fact, it is very costly and the more entities participating means the more coverage”

Boxing is a dangerous sport, it isn’t like cycling or running, people get hurt really bad as it is, but then to go and dope and take PEDs, that becomes very dangerous, as we have seen with the deaths of boxers recently as well as in the past.

“You don’t play boxing and it is a dangerous sport, at the same time boxers are different from other athletes, they all pray before the fight for the welfare of his/her opponent and himself, when the fight is over they meet in the center of the ring and hug each other, and doping is very expensive.”

Last year Canelo Alvarez was handed a six months suspension and no fine or probation and a similar punishment recently for Jarrel Miller who had three failed PED tests for his fight against Anthony Joshua. And yesterday renowned boxing writer Thomas Hauser broke news on the Boxing Scene, that an “A” sample taken from Dillian Whyte, tested positive for one or more banned substances prior to Whyte’s July 20 fight in London against Oscar Rivas. Although Whyte is in the World Boxing Council Clean Boxing Program which is administered by the Voluntary Anti-Doping Association (VADA), the test in question was administered by UK Anti-Doping (UKAD). 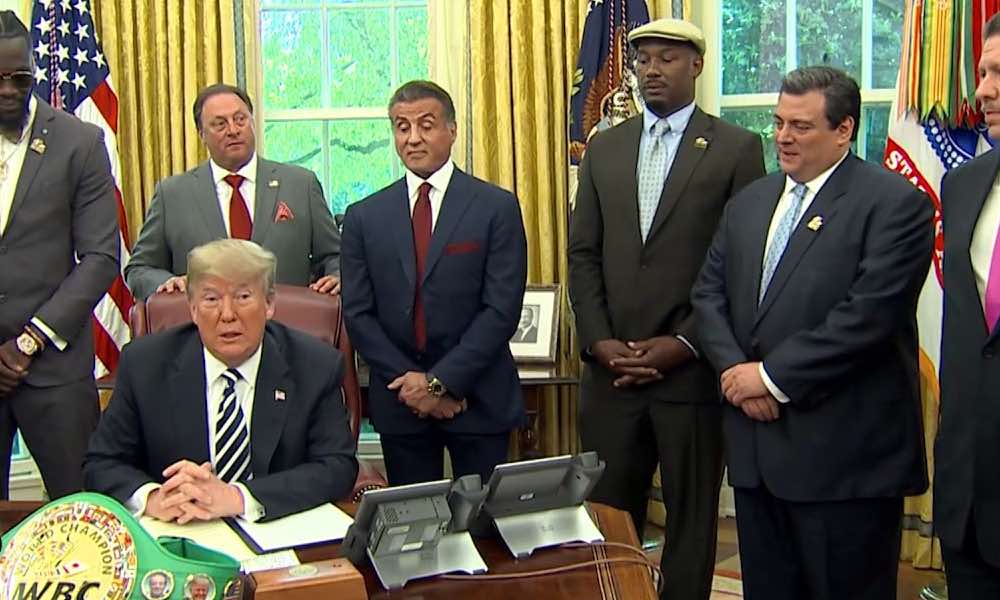 Mauricio Suleiman at the White House with President Trump

The punishments of Canelo and Miller were well within the rules of the NSAC and NYAC commissions but is it a fair punishment?

“This is an absolute statement by the commission telling the world that Canelo did not commit a doping violation. Authorities must have flexibility to investigate and rules according to the facts and the specific situation of each single case separately

Paulie Malignaggi recently said that Canelo didn’t expect the doping test in Mexico while he was there, and Mayweather Promotions CEO Leonard Ellerbe said that it was the first time the anti-doping went to Mexico and tested a fighter – for a fight that is happening in the US.

“It is difficult to have an opinion on comments by third parties, however, it is not true that it was the first time to have tests in Mexico or other countries, the clean boxing program has conducted tests in many different countries.

A major issue with Boxing and doping has been the costs for more stringent and more frequent testing, as the promoters wishes to keep the budget of a show low, to make sure they make profits on the events, as the sport of boxing is a tough business, but there is a loop hole in the sport of boxing ?

“Boxing is a different sport from all others, because each promoter is independent and each boxing card is independent as there is no season or league to follow. All other sports have the league as the owner of the business side with TV rights selling franchises etc. so those leagues can implement their own testing protocols as they have huge budgets to operate”

Is the president of WBC optimistic that one day Boxing will be a clean sport?

“I am optimistic that it will be one day. The WBC and VADA, as well as all the members of the boxing community from every single country will continue this quest to make boxing better and safer for the athletes, who are the heroes in the ring.”