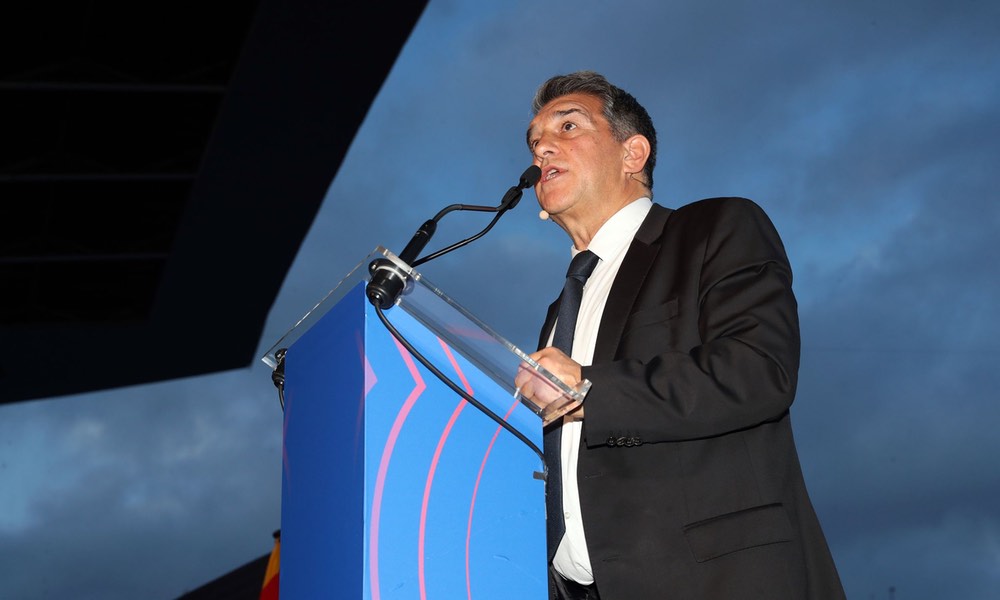 Barcelona, hit with almost the bad luck of bankruptcy, had their president, Joan Laporta who is determined to bring back the club on its toes, pulled essential financial levers which were befuddled by many fans and stakeholders.

The great European football club is facing Champions League humiliation after being dropped down to Europa League, which will in turn plunge the club into further crisis.

It leaves the boss, Xavi under intense pressure, the sums are not adding up for the president who gambled the club’s finances on Champions League success.

However, President Joan Laporta reminded everyone of how the club had almost been bankrupt when he replaced Josep Maria Bartomeu as the president in March of last year, during their AGM on October 9 this year at the Auditorium 1899 hall by Camp Nou.

Looking at Barca’s €727 million in asset sales, €153 million in signings and they are knocked out at group stages of the UEFA Champions League is quite pathetic, meanwhile, that spending was supposed to ensure this didn’t happen, but instead push them into the more promising start of their growth.

Sadly for Barcelona, it has not worked out like that. They splashed out €150m last summer on Raphinha, Lewandowski, Joules Kunde, Frank Kessie, Andreas Christensen, Hector Bellerin, and Marcos Alonso. Also, selling a large portion of their future Tv rights, almost half of their content production company, and took out a loan of €450m which seemed to refinance their heavy €1b debt.

Before their Champions League match at Camp Nou against Bayern Munich, Xavi made his Barcelona players watch Inter’s victory against Viktoria Plzen. It must have been difficult to watch. The five-time European Cup champions have essentially been demoted to the continent’s second division for the second year in a row. The Champions League, according to Xavi, has been “mean” to his team this year.

The fact that Barcelona lost to Bayern on matchday two “pissed” him off. With some justification, the coach proclaimed, “We were the better squad.” “We outclassed them”.

As for the two handball goals that ultimately determined a close game, Joan Laporta thought the officiating in the 1-0 loss to Inter at San Siro had been “scandalous” and painfully uneven. The truth is that Barcelona can’t gripe about losing at the group stage for the second time in a row. Robert Lewandowski’s deflected goal in the dying moments of the 3-3 draw between the two teams at Camp Nou ended Inter’s chances of a historic victory.

Real Madrid reclaimed first place in La Liga after defeating Barcelona 3-1 at the Santiago Bernabeu, which increased the pressure on Xavi. “I won’t blame the players, I’m accountable, I made mistakes, particular mistakes” Xavi said.
Given their unlucky string of center-back injuries after the international break, their domestic defensive record is extremely strong. But the persistent worry is that Barcelona, led by Xavi, has trouble competing with the big teams in crucial matches, particularly in Europe.

Last season, when he was just getting settled back into a club that was still coming to terms with the disarray brought on by Josep Maria Bartomeu’s terrible presidency, such dismal performances might have been excused, but not now.

And, worryingly for Xavi, the president has already acknowledged that he “truly didn’t anticipate to be in this situation because the technical secretary and coaching staff had put together a highly competitive team” after signings this year.

Even though Laporta firmly thinks that the team he put together is capable of competing with any team in Europe, Barca was eliminated from the Champions League before Christmas. He insisted that there was nothing to worry about financially, even though Barca had practically bet on reaching the quarterfinals and had even budgeted for the prize money for 2022–2023. Laporta told the club’s internal TV station, “Missing out on the final rounds is a severe setback, but we won’t lose all of that €25m-35m.”

Given the size of the summer investment, Laporta had already turned his focus to La Liga before Barca’s Champions League elimination was confirmed. Xavi is aware that despite the progress he has undoubtedly made with a team that features several exciting young players, he must deliver a major trophy this season.

After the Madrid defeat, he said, “With the effort made by the club and the players we have, we have to contend for titles”.

Other financial “levers” may soon be used to bolster the team; Laporta said that additional hires may be made during the January transfer window. Simply put, Barcelona must be prosperous this year from a sporting, business, and financial standpoint.

The health of their bank account is directly related to the strength of their brand, and for far too long, Barca has been associated with significant losses both on and off the field. Despite Laporta’s constant claims that “Barcelona is back,” it is obvious that there is still a long way to go.

The fans may find that difficult to accept, but as Xavi, himself stated, “We are unworthy of participating in the Champions League. Although it stings, it is the truth.”

With the club’s financial future on the line, they must also perform well in the Europa League to avoid further asset stripping. Considering that, despite some terrible performances last season, they still finished second in La Liga, an improved squad should present a serious challenge for the title this time around.