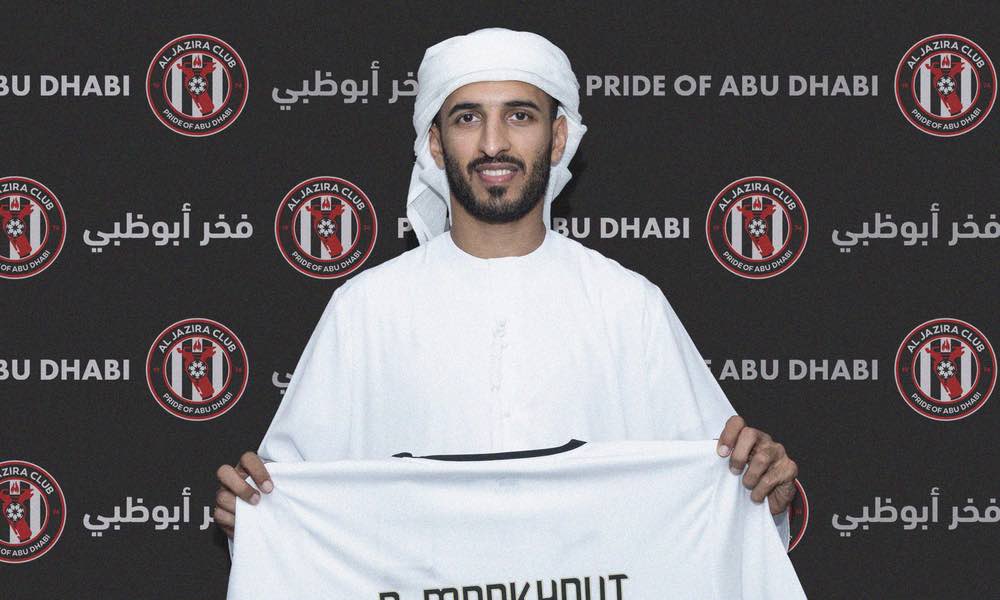 Al Jazira FC are delighted to announce the contract renewal of club and UAE national team record top scorer Ali Mabkhout Al Hajeri which will keep him at the home of the Arabian Gulf League champions until at least 2026.

The 30-year-old star is synonymous with the successful modern history of Al Jazira and is a graduate of the Club’s regionally renowned academy. During his 17 years at the ‘Pride of Abu Dhabi’, Mabkhout appeared in 289 domestic matches, scoring an astonishing 199 goals along the way to become the club’s record top scorer. Having scored 171 goals in 234 Arabian Gulf League matches, the striker now sits just four goals away from becoming the all-time top scorer of the UAE’s top-flight league.

Most recently, ‘The Pride of Abu Dhabi’s’ Vice-Captain led the Club to its third Arabian Gulf League title by playing every single minute of the season. Mabkhout’s exceptional campaign was topped by being crowed the league’s top scorer with 25 goals in 26 matches, as well as leading the assists standings with ten, alongside fellow midfielder Khalfan Al Mubarak.

Reaffirming the board’s priority to renew Mabkhout’s contract during this summer’s transfer window, Chairperson and board member of Al Jazira’s sporting committee H.E. Mohammed Saif Al Suwaidi said: “Mabkhout is one of the symbols of Al Jazira and Emirati football. We cannot measure the sheer importance of his technical ability to our team. He is also one of the best players to embody Al Jazira’s values and principles in the best way possible both on and off the pitch. Therefore, it was our top priority to renew his contract during this transfer window and to keep him at his second home for years to come.”

He added: “Many young and youth players consider Ali as an inspiration because of his efforts, commitment, spirit and high professionalism which he has showcased since the start of his footballing career. All these qualities made him compete against some of the best and most famous international players in our league and enabled him to top them both on an individual and team basis. We are all happy and proud of everything he does and will continue to do for Al Jazira and the national team. We have high hopes in his ability to achieve even greater individual and team success in the future.”

Expressing his delight, Ali Mabkhout said: “Al Jazira has always been my second home and my big football family. It is the club that gave me everything I could have wished for as a professional footballer. I want to thank everyone at the Club for their continuous trust and support in me over the past years. Thanks to our esteemed leadership, the club has a clear vision and a great squad for great success in the upcoming years.”

He continued: “I am very grateful to the Pride of Abu Dhabi’s loyal fans for showing me unconditional support every single day. I am very thankful for the opportunity to play for them for many years to come. They are one of the biggest reasons I train my hardest every day to live up to their high expectations on the pitch. My focus now lies on working with the rest of team to build on the great achievements of last year and fight for all titles next season.”

During his tenure at the Club, Mabkhout cemented himself as one of Asia’s most prolific strikers. Adored by fans across Abu Dhabi and the UAE, the Emirati striker won the Arabian Gulf League on three occasions (2010-11, 2016-17, 2020-21), UAE President’s Cup three times (2010-11, 2011-12, 2015-16) and the Arabian Gulf Cup once. On the global stage, the prolific #7 striker represented Al Jazira’s colours 12 times in the AFC Asian Champions League, scoring 13 goals along the way. He also featured in the historic 2017 Club World Cup which saw Al Jazira secure fourth place.

Al Jazira Chief Executive Officer, Ali Youssef Al Hammadi said: “Ali is an influential member of the Al Jazira family, he has been proudly with us every step of the way of his distinguished career and has written his name in the history books of our club. There was only one decision we always had in mind when it came to his future, and that was to pen down a long-term deal. Ali is respected and loved across the country and the wider global football community, and we take great pride that he actively gives back to our local community.”

Mabkhout’s wide collection of individual accolades with the Abu Dhabi club includes winning the Arabian Gulf League golden boot twice (2016-17, 2020-21) and being crowned player of the season in the title-winning 2016-17 season.

As one of the best players to put on the United Arab Emirates national team shirt, Mabkhout is currently all-time record top scorer with 76 goals in 92 matches since his first appearance for the senior team in 2009. He was most notably the 2015 Asian Cup top scorer with five goals after leading his squad to third place finish. His records are also recognised internationally as he now sits just eighth in the list of the highest international scoring players in the world behind the likes of superstars such as Cristiano Ronaldo, Lionel Messi and Pelé.

Ali’s renewal follows a string of contract extensions by the Club over the past few months to secure the services of its star players for the upcoming seasons, this includes Ali Khaseif, Miloš Kosanović, Thulani Serrero (2023), Khalifa Al Hammadi (2025), in addition to Dutch head coach Marcel Keizer (2023).

Mabkhout will lead Al Jazira’s frontline as the Club embarks on the quest to defend their crown in the 2021-22 season starting from August. The Pride of Abu Dhabi will also be representing the United Arab Emirates by challenging for the AFC Champions League.