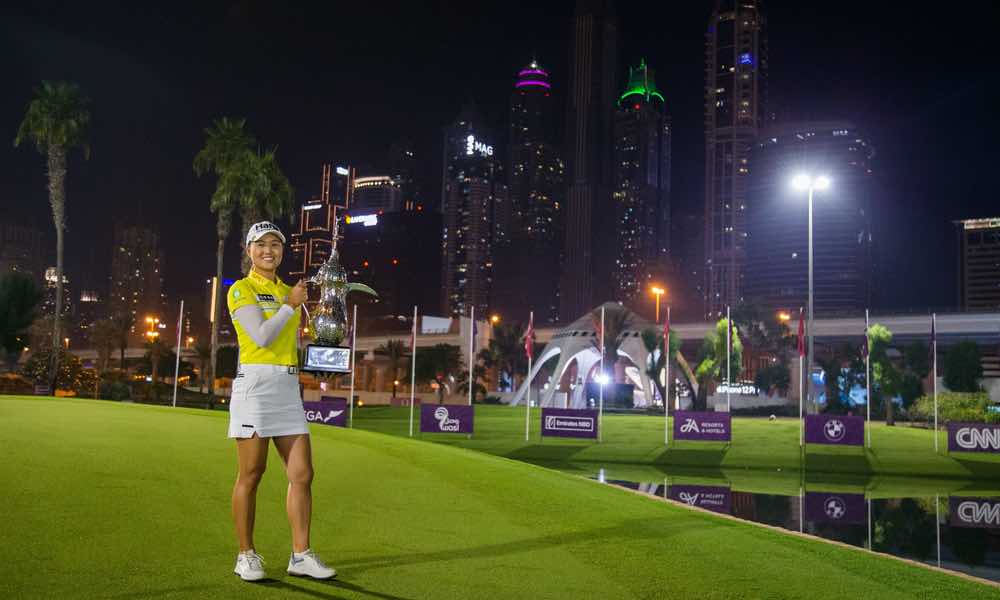 World number nine Minjee Lee secured her second Ladies European Tour victory with a dramatic play-off victory at the OMEGA Dubai Moonlight Classic. The Australian posted a three-under 69 under the floodlights at Emirates Golf Club to finish on 10 under alongside Celine Boutier. The French national led for most of the day until a late bogey saw her post a final-round 68.

The play-off took place on the par-four 18th hole of the Faldo course, with both players needing to sink tough putts to win the contest. Whereas Boutier unfortunately came up short with a 30-foot birdie effort, Lee had her eye in and sunk a fantastic 20-foot putt to secure the win on the first extra hole.

Commenting on her final putt, Lee said: “I couldn’t really see the break too well on the last hole, but I thought it would be about two cups outside the right and luckily I hit it hard enough and it dropped. It feels pretty special to be here playing at night-time and the course has been amazing It’s been a really fun week.”

She added: “I didn’t really see the scores until I had a couple of holes left and then I ended up making a bogey on the 15th so I stopped looking. Then my caddie told me what the score was on the last hole and I realised I was tied and had a chance of winning.”

Reflecting on her first Moonlight Classic appearance and playing under the floodlights, Minjee Lee concluded: “This year has been tough but this is a nice way to close it out. I’ve really enjoyed the format and everything about the week, my second time playing night golf was certainly memorable.”

Formerly known as the OMEGA Dubai Ladies Masters, the inaugural tournament was played in 2006, with a strong rollcall of previous winners, including the two-time winner, Annika Sorenstam, and four-time champion, Shanshan Feng. Sorenstam won the first two events back to back in 2006 and 2007, while Chinese former world no.1, Feng, dominated from 2014-2016, winning the tournament three times in-a-row.

The newly named and scheduled tournament has been switched from May to November after its first staging in spring 2019 when it achieved global recognition as the world’s first professional day-night tour event.