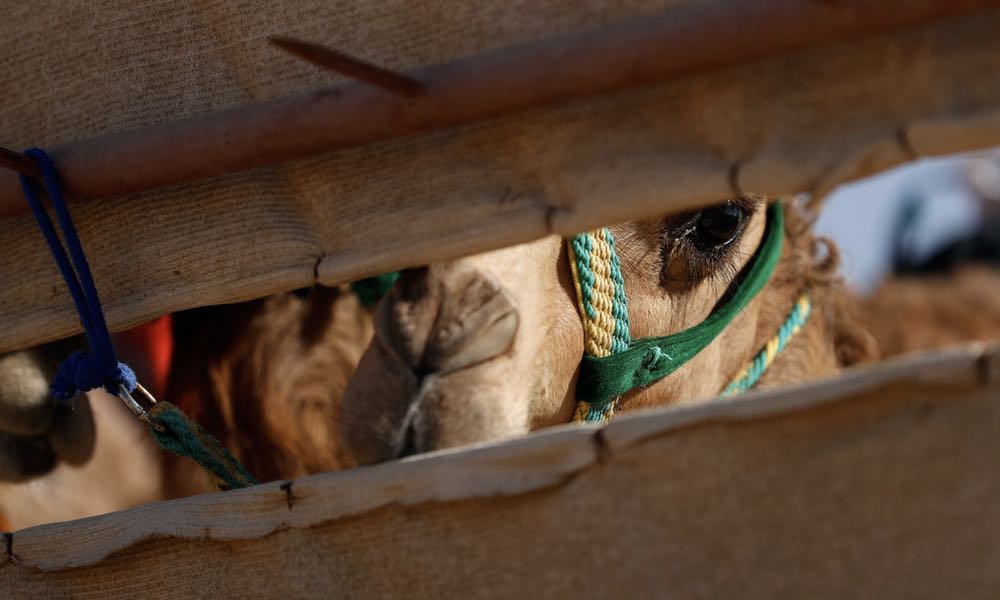 October in the UAE brings two things: winter, and camel racing. The ancient Arabian tradition dates back to the 7th century and still creates a spectacle big enough to draw tourists and locals alike in droves. If you’re lucky enough to grab a trackside seat, or even an air-conditioned ride-along, you may notice that the camel jockeys are small in stature- even by jockey standards.

That’s because the jockeys aren’t jockeys at all. In a move typical of a region that blends tradition and innovation, the UAE, among other Middle Eastern nations, uses robot jockeys in their camel races. Small, box-like bots sit atop the racing dromedaries, directing the competition through remote commands from audio communication devices. To fully assess the significance of such a culture-clash, it’s important to explore the history of camel culture in the UAE, and see how the Emirates arrived at their digital jockey solution.

Camels have been status symbols on the Arabian peninsula for thousands of years. The precursor to the modern sports car, the camel provided far more than transport, from food to fuel to fertiliser. They go by many names and cultural signifiers, labelled Safinat al-sahra (the ships of the desert) and ‘God’s gift to Bedouin’. In other, more agriculturally-focussed regions like Egypt and Pakistan, locals primarily used camels for farm labor. To this end, they bred stronger and stockier animals. By contrast, in the Arabian peninsula, bedouin used camels as military tools, for raiding and defending: the ‘ships of the desert’ were battleships first and foremost. This led to the Arabian Mahaliyat (local) breed developing the speed and sleekness necessary for lightning-fast combat. Emirati camels are born to race.

Camel racing creates competition between the quickest specimens, to show off their qualities and draw in a crowd along the way. Before long, it became a pillar of social celebrations and an important tenet of Emirati culture. Locals incorporated camel racing into wedding ceremonies, religious feasts, and even visits from esteemed Sheikhs. 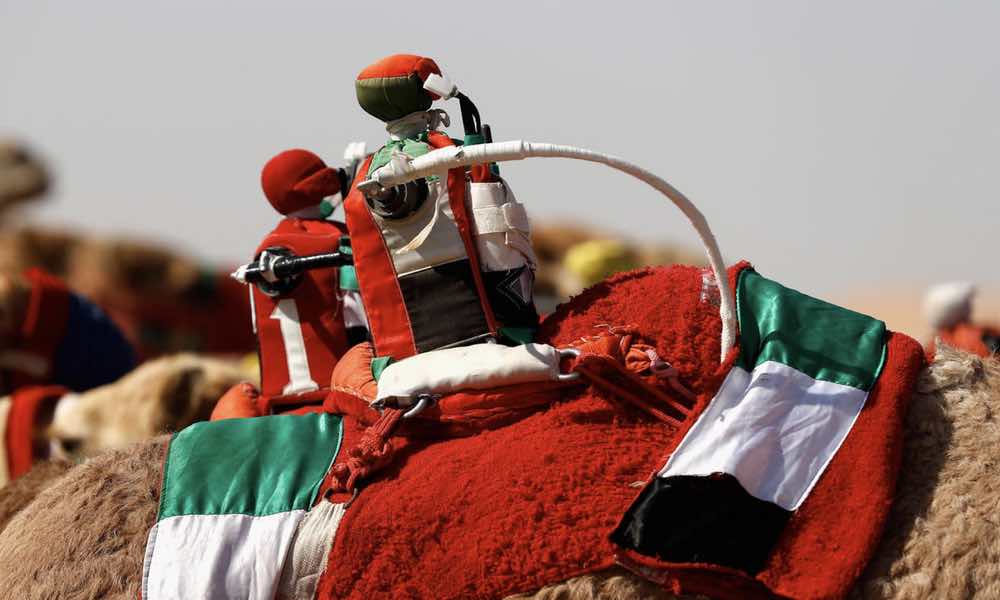 However, as camel racing galloped into the 20th century, the region, and the sport, experienced revolutionary socio-economic developments. In 1962, Abu Dhabi exported its first barrel of oil. Less than 10 years later, seven emirates formally unified into the UAE. Camels, by that point, no longer enjoyed the apex of transportation or military power. Four wheels replaced four hooves. However, as Sheik Zayed would later state in 1997, the Emirates “are in debt to camels.” The UAE boomed in a black gold rush, yet it never forgot the important debt of cultural heritage to camel culture and camel racing. The nation’s rapid and evolving economic expansion actually brought a need and a desperation for fixity, authenticity and the preservation of traditional culture. In the Emirates, nothing is more traditional than camel racing.

The government invested huge swathes of time and money into organising and modernising the sport. Robotic jockeys are perhaps the most dramatic technological twist in the journey, but they’re by no means the first. A host of lavish stadiums sprung up, like Al-Shiba and Al-Marmoun in Dubai, and Al-Wahda in Abu Dhabi. In 1992, the Camel Racing Association (CRA) formed, and immediately, an ethical issue arose in the industry. Races, by now a multi-million dollar institution, prefered smaller and lighter riders to give the competitors an edge. Camels start racing at three years old, but don’t stop developing until six years old, so heavier riders can cause spinal damage as they grow. Whilst horse riding uses stirrups to spread a jockey’s burden on the animal, a dromedary’s hump rules this out. While traditionally, the youngest and nimblest member of a camel-owner’s family rode their camels, a culture of importing child-jockeys arose in Arabia.

Young children from North Africa or South Asia moved to the Emirates and led a dangerous and low-paid life, until the CRA formed. A year after its formation in 1992, they regulated against younger and lighter jockeys. Ten years later, the United Arab Emirates became the first country to ban child camel jockeys, on July 29 2002. Just like that, the market for lightweight robo-jockeys was born. 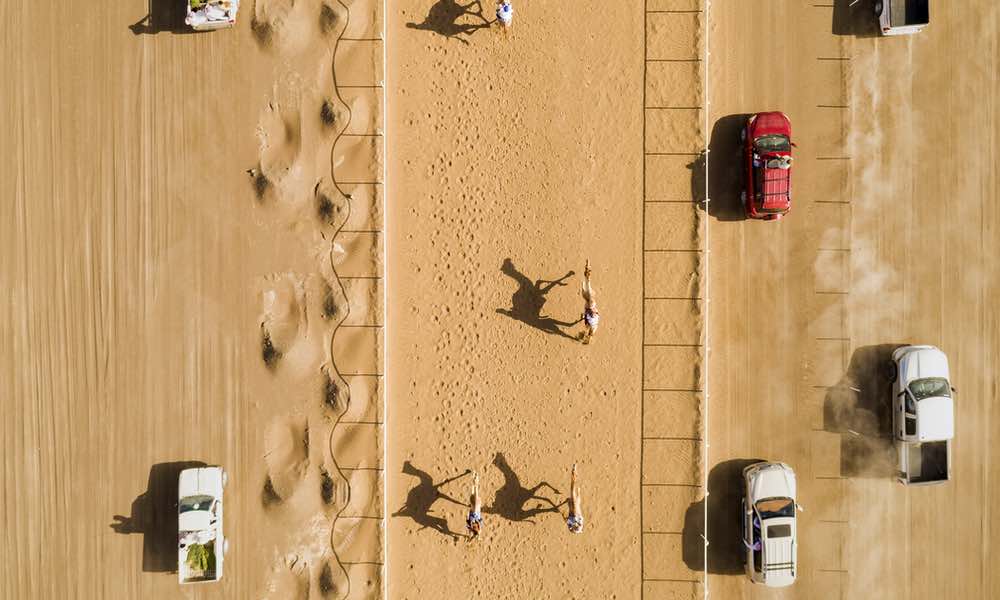 The Emirates, along with nations in similar situations like Qatar, became the first to investigate designers and suppliers for robotic jockeys, both locally and globally. Qatari officials developed a prototype with a Swiss firm called K-Team. Spearheaded by its chief designer Alexandra Colot, the team created large aluminium-frame humanoids to ride camels in the desert. The robots weighed around 27kg, lighter than the minimum human regulations of 35-45kg, and had I, Robot-esque faceplates.

Ultimately, they proved too expensive, and even at a fraction of a human’s body weight, too heavy. Emirati camel owners found a simpler solution. By combining a standard household power drill with the remote keyless system used in car keys, they created cheap remotely activated rotating motors. They boosted and stabilised these systems with the GSM controllers used in landline or garage door systems, and mounted them to small frames. If they attached a length of plastic to the drill bit, they had a remote control camel-whip. If they attached a walkie talkie and covered the frame in a colourful racing jersey, they had a homemade robot jockey.

Of course, it may seem cruel to whip camels remotely. In some cases, it absolutely is. However, as the CRA regulated and banned child jockeys, they also regulate dharb al-hejin (camel beating). Their rules on whipping date back almost thirty years, and state that any contact should be “light and directed to prod and alert the camel”. The sport’s legacy spans hundreds of years, and each year has seen revolution and reassessment from its aesthetics to its very foundations. Again, it’s not just the introduction of robots that makes the sport such a “young-old” Emirati hybrid.

Evolving from simple walkie-talkie and remote-control camel whip designs, robots now have sophisticated telemetry and diagnostics. The lack of fixed rules on their exact designs allows for a creative diversity in robot jockey style. However, in such a competitive sport, hidden camel-spurring electrodes are sometimes discovered and penalised. Unlike the robots, these electrodes have existed in the sport since electrodes have been available. Thankfully, they have been nationally and internationally condemned and penalised for just as long. 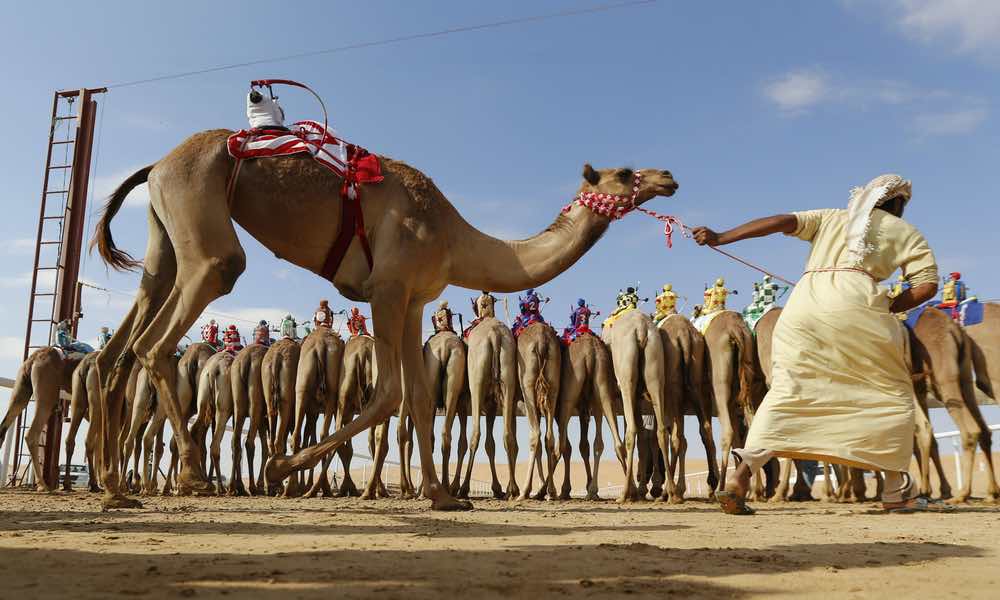 While the camels themselves enjoy a traditional diet of oats, bran, dates, and cows milk, the jockeys survive on a mixture of electricity and walkie-talkie directions from their owners, who ride alongside the racetrack in SUVs. In each race, the past and future transportation technologies race alongside each other. It has been this way since oil started flowing in the gulf in the 60’s. Since then, 4x4s keep up with the racing dromedaries every year, cheering on the contestants and kicking up clouds of desert sand.

Camels race at speeds of up to 25mph, and constant updates and directions prove critical. As these races go on for about 8km at speed in the baking Emirati sunshine, jockey automation protects human lives while sustaining an ancient tradition. The electronic camel riders cost thousands of Dirhams, or hundreds of dollars, each, but this pales in comparison to the sizes of the prizes on offer.

The tradition, like the Emirates, has prospered beyond all expectation. The quantity of racing camels in the UAE increases every year. Between 2014 and 2018, it more than tripled from 50,000 to 160,000. As the sport evolves alongside the robotics and technological industries, each prompts the other to new feats. At the annual championship in Dubai, camels race in the enormous Al Marmoun track for millions of dollars.

The UAE boasts 15 camel racetracks around the country, with events ramping up to almost every weekend between November and April. Many tracks come equipped with whole car showrooms packed with hundreds of luxury sports cars to be given out during competitions. Prizes can include trophies and vehicles, not to mention glory, and often result in a multi-million buyout from the Emirati royal family. In fact, the sport ranks among the richest races in the world. 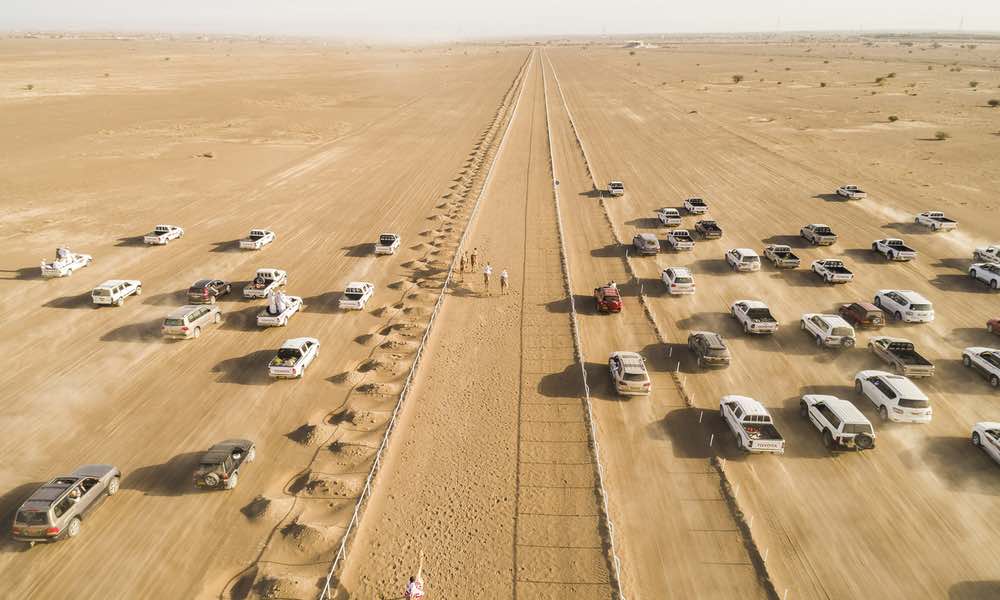 While the sport seems to revert from large man-sized jockeys to small bundles of parts and fabric, new technologies still look set to innovate in the Emirates. In 2017, Emirati startup Maia systems pitched a new product called Jamalytic. The CEO, Saeed Alnolfeli, grew up near Al-Wathba camel racetrack. After training in information technology at Zayed University and the Masdar Institute of Science and Technology, Alnofeni helped develop ‘command and control’ systems in military tanks. He then co-founded Maia systems, and applies his technological understanding to advanced camel racing sports science.

The Jamalytics service works as camel-mounted hardware with an accompanying app. Rather than innovating the jockey mechanically, it looks set to innovate in the sport via digital analytics. Tracking and monitoring sensors sit in front of the robotic jockey, mounted on a 3-D printed TPU wire case. TPU, or Thermoplastic Polyurethane, is light, flexible, and can withstand heat up to 220 degrees centigrade. All these features make it ideal for prolonged racing in Emirati desert heat. Alnofeli calls Jamalytic ‘the fitbit of camel racing’, and as a technological innovation, it looks fit for the future. English football clubs like Brentford and Manchester City look at transfer windows with a ‘Moneyball’ inspired buying approach, and quantitative analysis could revolutionise camel racing with data-driven technology like Jamalyitic.

Like much of Beduoin culture, and like 3-D printed TPU, camel racing finds strength in flexibility. As ever, Emiratis use camels to navigate social terrain as well as geographical, and they do it at extreme speeds. As of May 2020, the CRA, in conjunction with the National Emergency Crisis and Disasters Management Authority (NCEMA) announced coronavirus restrictions in the sport. As part of the restrictions, devices like robot jockeys and mounted analytical sensors must be applied at the farm not at the track so limit the disease. This is a sensible measure, and while rapid changes are typical of the sport, it would be amusing to explain such a development to ancient celebrating Bedouins.

This winter, like so many winters before, you can see winning camels dunked in the traditional golden saffron of victory. These winning camels, often the native mahaliyat breed, have been winning races for hundreds of years. They will continue to do so, only now with their unconventional robotic friends in tow. In 1996, Sheikh Zayed said that ‘knowledge about the past enhances the citizen’s concern and attachment to their wahan (homeland)’. In the fast-paced culture-clash that is the modern UAE, the ancient, evolving sport of camel racing dashes from the past to the future at a canter.